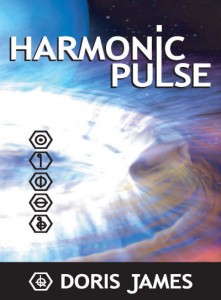 Clever Alien hieroglyphics expert, Dr. Jessica Scott and laid-back paleoanthropologist, Dr. Tom Adams, heat up the sands of the Sahara as they join covert government operatives from H.A.R.P. to unlock the secrets hidden aboard an ancient Alien craft.  Shocking revelations about a genetic conspiracy are terrifying as life’s dimensional divide deteriorates and threatens to disappear.

Harmonic Pulse tests the fibers of all existence as we approach the Mayan End Day and the Zero Effect that will cancel the stabilizing force of earth’s electromagnetic poles.  Who will survive when the Human, Alien and Ethereal worlds collide?  It’s time to meet the keepers of our fate as they protect the keys to humanity.

“…I thought it was a really good read.  Entertaining and romantic with an appropriate twist and turn here and there.  Like an “Indiana Jones” meets “Contact” meets “Da Vinci Code.”
-Robert Cota, Producer, Downtown Filmworks

Read Quest for Dimensional Travel, which is the Preface for Harmonic Pulse.